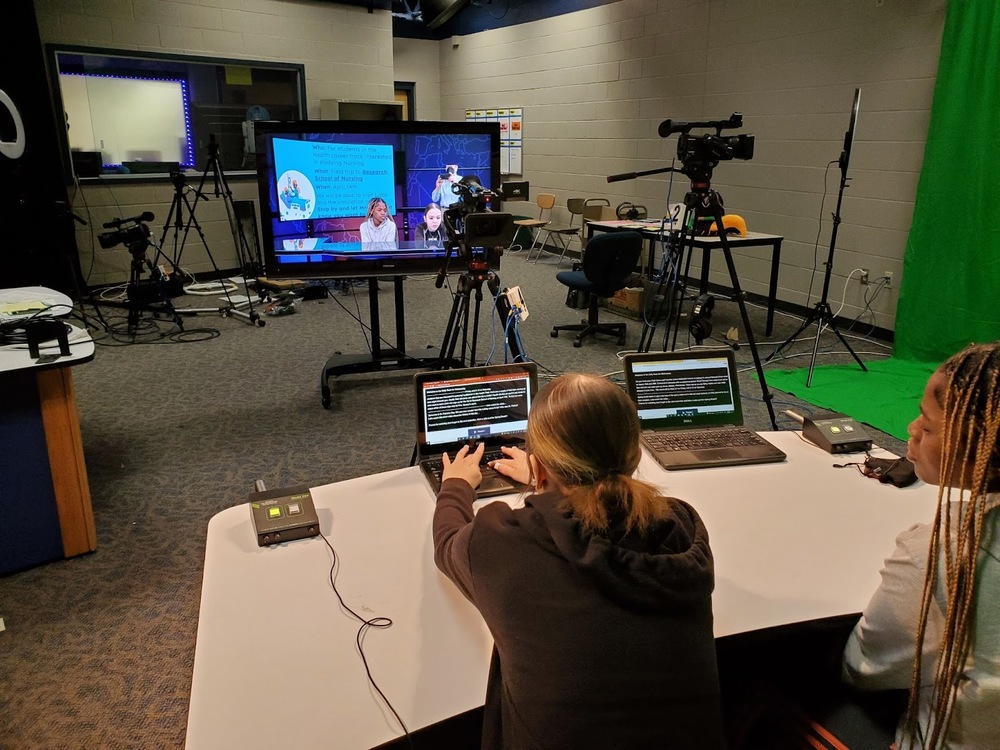 Students in the Center High School Broadcast Journalism class are learning real-world experiences about broadcast journalism, television production, and communication as they produce a daily live program called the “Daily Buzz”. Featuring stories from the high school and community, the program is broadcast live via the HiveTV YouTube channel each morning during the school year. The morning starts with a meeting among the production staff (anchors, director, and CHS teacher Steve Parker). They outline the plan for the broadcast into three segments - school, community, and a feature story. Some of the segments are pre-recorded by HiveTV students, while others are delivered live by the anchors.

The two anchors collaborate on writing the script for the live segments, loading them onto their laptops, which are used as teleprompters. There’s plenty of back & forth discussion as they work on the best words to use and how to divide their speaking roles.

The student director then sets up the flow of the broadcast on the studio control panel. About 20 minutes before going live, the director and anchors do a rehearsal in the studio. As necessary changes are identified, they are made in the control panel sequence and/or the scripts. Collaboration and adaptation under the time pressure of going live is a key element of the skills students learn as part of the production.

At 8:45, it is time to go live. As with any live broadcast, there are “ad-libs” that are required due to technical or other issues that arise. The director and anchors work seamlessly together to handle whatever comes up.

After the broadcast (10-12 minutes) the team gets together for debriefing on what went well, what could be improved, and ideas for the next show.

Thanks to the support of the Center Education Foundation, the Ewing M. Kauffman Foundation, and Niles Media, CHS students have the opportunity to not only learn technical skills, but universally applicable skills of teamwork, problem-solving, and producing results under time pressure.