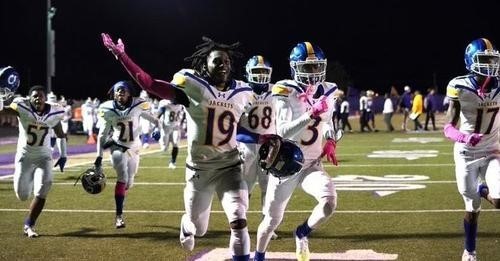 It was not an easy night to play football....

The weather on Friday night can be described in one word - MISERABLE!

The rain was constant and heavy. The wind was whipping. The temperatures were low and dropping. The football was wet. The turf was wet. The players, coaches, and fans were wet. We have no photos because nobody's phone worked in the rain.

BUT, the Yellowjackets were not deterred by the conditions. They ran, they passed, they tackled, they fumbled, they recovered fumbles, they scored, they intercepted passes, and they prevailed over a strong Carl Junction team by a score of 33-6.

The Yellowjackets survived and advanced to the next round.

Congratulations to Coach DeLong and his entire team for a fantastic perfomance.

And, thanks and congratulations to the fans who were there to watch and cheer them on!

On to the next. District championship game vs. Nevada. Next Friday at 7pm at Yellowjacket Stadium. Let's come out and cheer them on.